Joyful Joker Megaways is the result of an exciting collaboration between All41Studio and Microgaming. The layout contains 6-reels and 117,649 Megaways to win and cascading wins! You can benefit from the Joker Spins, where a bonus wheel can reward you with multipliers. Moreover, there’s a Free Spins bonus feature with unlimited multipliers. Joyful Joker Megaways is available for mobile and desktop, and you can play for free or real money using Instant Play without downloading.

Joyful Joker Megaways features the Megaways engine with varying winning ways with every spin, and there are six reels. The last one can display up to seven symbols, whereas others can go up to six rows. There are four positions above the central reel, and when they all reach their maximum potential, there are 117,649 winning options. Joyful Joker Megaways effectively combines the old with the new to produce an outstanding slot machine. The retro design pairs up with dynamic gameplay and bonus features. The Rolling Reels feature can give you extra wins with one spin, and the Megaways mechanic triggers Free Spins with multipliers. 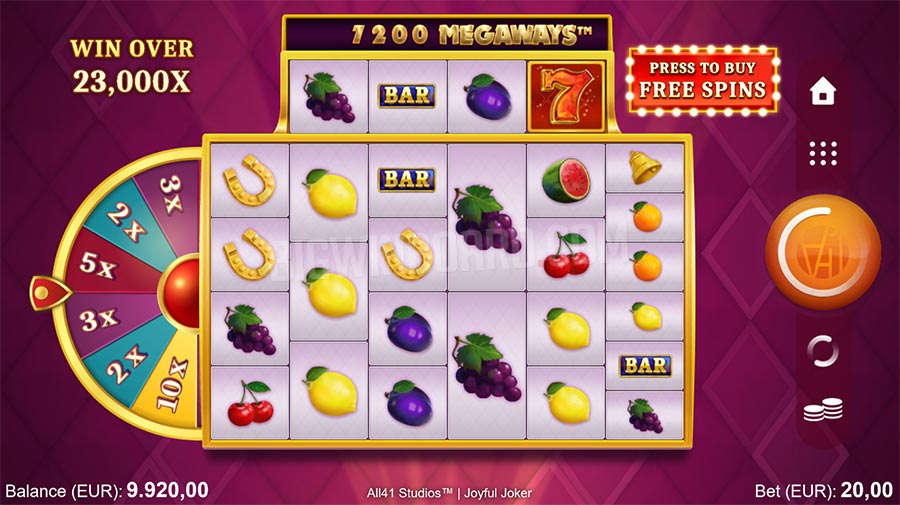 How to Play Joyful Joker Megaways

Joyful Joker Megaways has a broad betting range of €0.20 to €20 a spin and a winning potential of 23,000x your stake with a single spin. The design is straightforward for a Megaways slot with a purplish background containing recessed diamonds. The game show-like soundtrack has the crowd cheering as you play the game, and the traditional slot symbols are appearing on the reels, including cherries, lemons, and oranges. They make up the low paying ones, the plums, grapes, and melons are the medium payers, and the premium symbols are the golden horseshoes, bells, bars, and lucky sevens. Landing a combination of six premium symbols can pay you 50x your triggering stake. The white diamond image is the Wild symbol that can substitute others to form winnings.

The Rolling Reels bonus is standard in Megaways slots, and you can call it a Cascading Reels feature. You can activate it whenever you form winning combinations on your reels. The symbols that subsequently form part of a win disappear from the reels, and new ones drop in to replace them. That result in more winnings in one spin. The rolls continue as long as you keep land winning combinations. You can trigger the Joker Spin feature at random on any winning spin during the base game. The wheel to the left comes into play, and the Jolly Joker gives it a whirl. You can win multipliers of 2x, 3x, 5x, and 10x your stake, depending on where the pointer lands. It applies to your subsequent Rolling Reel win, and the multiplier increases by one for each consecutive win.

Where Can I play Joyful Joker Megaways?

Joyful Joker has been created by All41 Studio’s which is a new game studio, you can play Joyful Joker in different Canadian casinos such as Leo Vegas, Katsubet Casino, West Casino and other casinos which have Microgaming as a gaming provider.

If you prefer playing online slot games on the go, you’ll be glad to know Joyful Joker Megaways is mobile-optimised. You can play the online slot machine on any mobile device, including iOS and Android phones and tabs. The game uses HTML5 and can adjust to smaller screens on any modern operating system. The Instant Play mode goes perfectly with mobile play, as there’s no waiting or downloading requirements.

The RTP payout percentage of Joyful Joker Megaways is 96%, which is the average in the industry. The volatility is medium to high so that you can expect modest and substantial winnings. The maximum payout is 23,000x your bet, which is pretty decent for a Megaways slot machine. Overall, Joyful Joker Megaways is an engaging slot machine that draws on the strengths of traditional fruit machines while infusing bonus features and free spins into the experience.